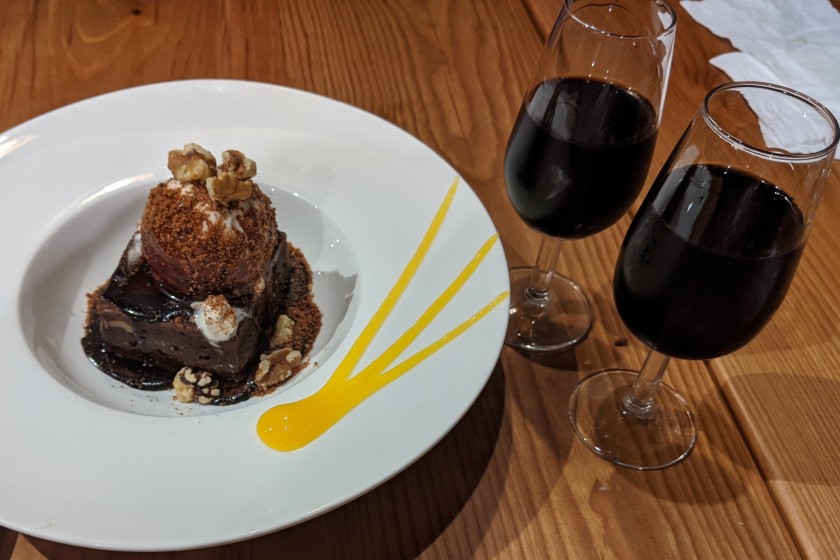 After our time in Cordoba, we headed for Granada. This was another place I had visited in high school, but I still wanted to make sure that the Mister got a chance to get a lay of the land. I poked around the interwebs and found an evening walking tour with stops for tapas along the way. It was the perfect solution, so I paid in advance. I was really looking forward to it.

When we arrived in Granada, it was 44 C. (For you Fahrenheiters, that is over 111 degrees.) I was doubly happy I’d booked us an evening tour so we could take our stroll when it had cooled off to just 100 😉

Unfortunately, when we went to the meeting point, not only was there no guide, the travel agency was clearly closed. And when I say closed, I don’t just mean the lights were off. I mean barred gates over every window and no sign of life at all. There was a handwritten sign with a phone number on the door, so I gave it a try.

The person on the other end was dismissive and didn’t speak a word of English or German. I dragged what little Spanish I could remember out, and she insisted there were no tours scheduled and we couldn’t have tickets. (I was holding them in my hand.) She put me on hold for a long time, and when she finally came back, she had muted me and couldn’t hear my replies, so she hung up. I’m sure you can imagine my frustration. We were able to get a full refund later on, but at that moment, I was pretty pissed off. Thankfully…

A Good Dinner Can Make Everything Better

We were all dressed up with nowhere to go, so we decided we’d better find somewhere. Luckily, Granada is a big, beautiful city and there are lots of great restaurants. We found one in our area called La Vinoteca that I recognized from the guidebook. It was just barely late enough that they were opening for dinner, so we headed off into the tangle of side streets.

It was one of the only times we ate inside the whole trip, which did make us a little nervous at first. But as very few self-respecting Spaniards would eat dinner at 8PM, we got the entire dining room to ourselves for most of the meal. They had also put up plexiglass dividers, and we were seated by the window, so even with Covid going on, we felt very safe and happy to be in the dining room.

…and that was even before we saw the menu. We would have gotten plenty of meat and cheese if we had been on the tour, but we decided to treat ourselves to more unusual fare. 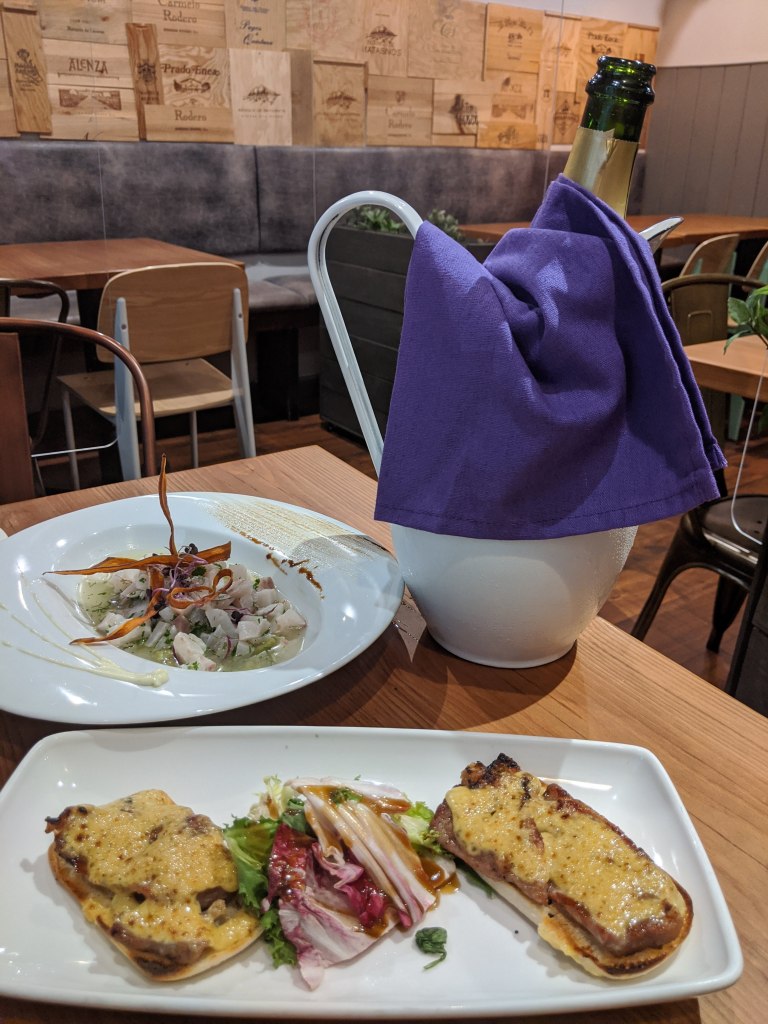 I am allergic to almost all foods that are naturally high in Vitamin C, so ceviche is usually a no-no. Most of the time I’ve come across it, the ingredients contain both tomatoes and lime juice. The acid cures the fish, so it is not exactly cooked, but not raw either. The Mister had a hankering, so we got it even though we couldn’t share. (Our general rule is to share everything so we have a chance to sample as much as possible. It’s an excellent rule, especially while traveling somewhere like Spain!) For no reason I could figure out, I actually was able to enjoy it as well with no allergic reaction.

The dish in the front was described as pork with “gratinated mustard.” I wasn’t really sure what that meant, but it reminded me a little of the bechamel sauce on top of things like moussaka that I eat when in Greece. It was an excellent thing to pair with cava, the Spanish equivalent of champagne. I started drinking it regularly after my study abroad semester, and I even served it at my wedding.

For our second course, we had suckling pig, which was another thing I tried for the first time in Spain. That time, I was in Toledo, and it brought back memories of that evening. But the dish that really stole the show was the octopus. 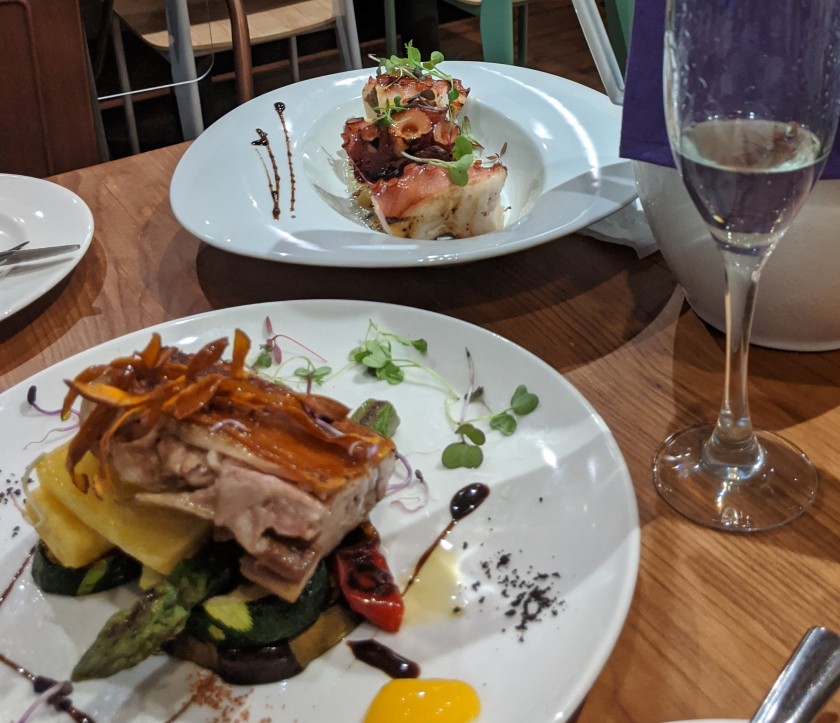 There were two types on the menu, but I was intrigued by the one that had goose liver and roasted pears. We’d had goose pate a few times already, but these were the livers themselves. The slightly bitter livers were layered between chunks of smoky octopus tentacles (the biggest I’d ever been served, making them also the most tender) and sweet pear. The combination of textures and flavors was AMAZING.

We finished the meal off with a decadent chocolate dessert and port around the time the next people arrived at the restaurant. 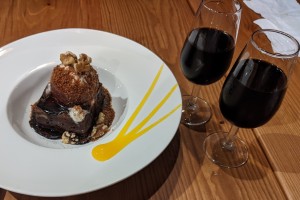 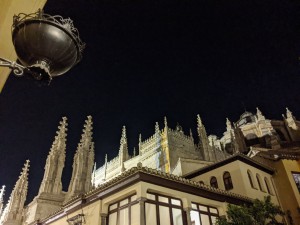 Afterwards, we weren’t quite ready to go to bed, so we took a stroll. Like most Andalucian cities, there was a beautiful cathedral. We got to see it lit up for the night.

We expected to see a lovely bit of architecture, but we didn’t realize we would be stumbling on to amazing music as well. On one side of the cathedral, we stopped to listen to a woman who was playing her guitar and singing for tips. But on the other, there was an entire formal flamenco concert going on! We asked some locals about it the next day, and it turns out that all summer long there are performances there every night. Unlike our first encounter with flamenco on the trip, there were no dancers. Instead, a six-man band was doing some of the most amazingly complex rhythms with their hands and feet while one of them sang. If the dinner hadn’t been enough to redeem the evening, the concert certainly was.

The next morning, we had tickets to visit The Alhambra, which alongside the Mezquita tops my list for most fabulous buildings I’ve ever seen. Come back next week for those pics! (Want to read about the rest of the trip? Visit the whole series here.) 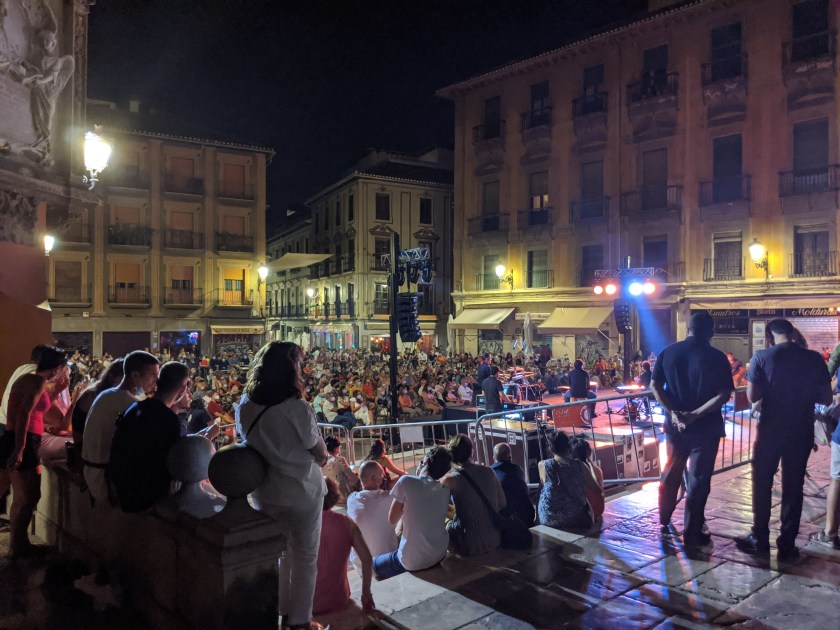 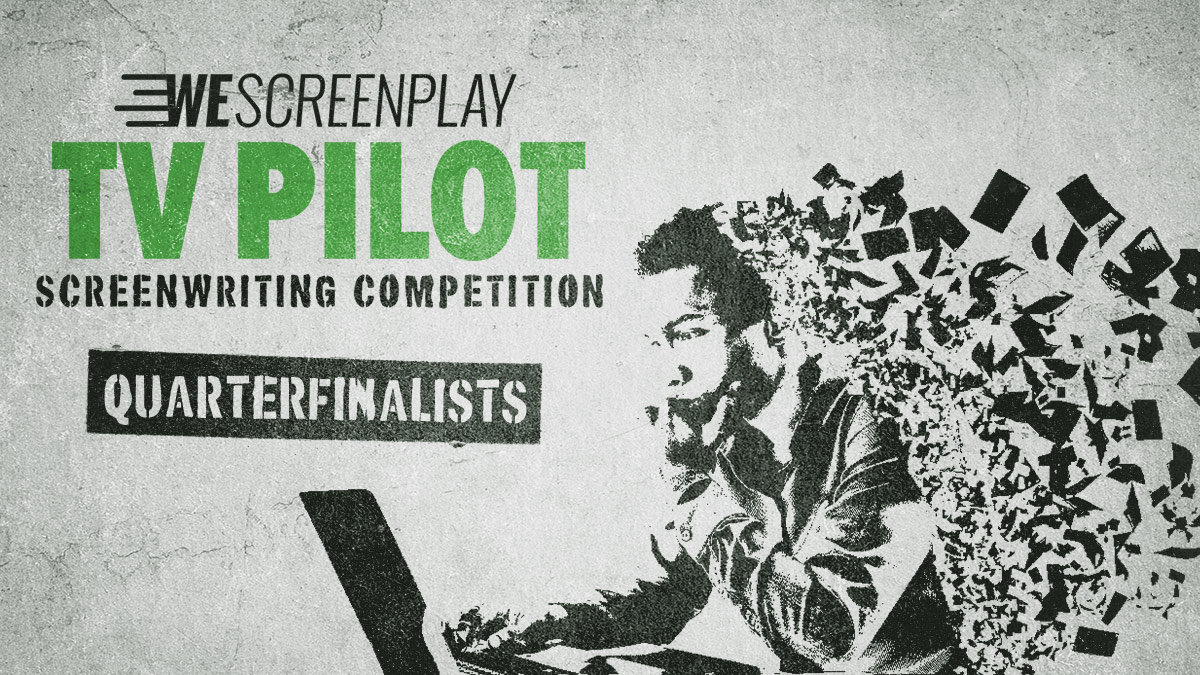