So far on the trip, we were visiting places I had never been before. But when we turned East from Huelva province, we entered territory I knew well from my first visit to Spain when I was 16. The landscape here is a lot like northern California – rolling hills covered in either dry grasses or olive groves. (Sorry, I don’t have good pics of this. We were driving, so they all came out blurry.) We also took the scenic route, so we dipped in and out of a national park that was far rockier…with roads to match. As The Mister put it, these were roads that jostled you in 3D.

Out on the plains we also noticed some types of trees we didn’t expect to see. Especially in Huelva, there were eucalyptus trees. We did a little digging and it turns out that the area had become deforested during Spain’s industrial revolution (largely driven by British companies), and eucalyptus trees were planted to stave off erosion later on. Obviously, they aren’t native to the area, but do very well in the dry climate. The other surprise were tiny, stunted-looking oaks. As a Midwesterner, I am used to seeing huge oak trees in parks and yards, primarily for shade. But in Andalucia, these small oak trees are for one important purpose – providing acorns to feed pigs for the famous Iberico pork. Everywhere you go, you see Iberico ham, Iberico pork filets, and even Iberico pate. And yes, it is DELICIOUS.

We got in to the city around 8PM, which meant that it was just barely dinner time for Spaniards. I picked our hotel based on its proximity to the Jewish quarter and La Mezquita, but we also ended up adjacent to a large park. As it happened, that put us a mere 5 minute walk from the first gastromarket to open in Andalucia. Mercado Victoria is housed in a renovated, Victorian era greenhouse, so it is basically all glass and steel. It was pretty crowded indoors, so we opted to take our food out to one of the patios. Even at 9:30, it was still around 90 degrees. In addition to a variety of seafood to nibble on, we got negronis featuring a local vermouth. A negroni is gin, vermouth, and campari, which usually means it is a pretty bright orange. But the local vermouth was a dark brown and reminded me of the taste of root beer. Not unpleasant, but not at all what I was expecting!

After being thwarted in our pursuit of Roman ruins early in the trip, we decided to walk over to a site in Cordoba that is illuminated at night. It nestles against city hall. This temple and many other amazing pieces of the past is why Cordoba was declared a world heritage site. They have actually made replica columns to stand on the existing base to help give a sense of the scale of this building.

What’s even crazier is to find out that the building itself was only a tiny part of the larger complex, which included a gigantic circus. (No, not the kind with clowns, the kind for chariot racing.) This is a closeup of one of the placards explaining the site. The columns in my picture are from that temple. 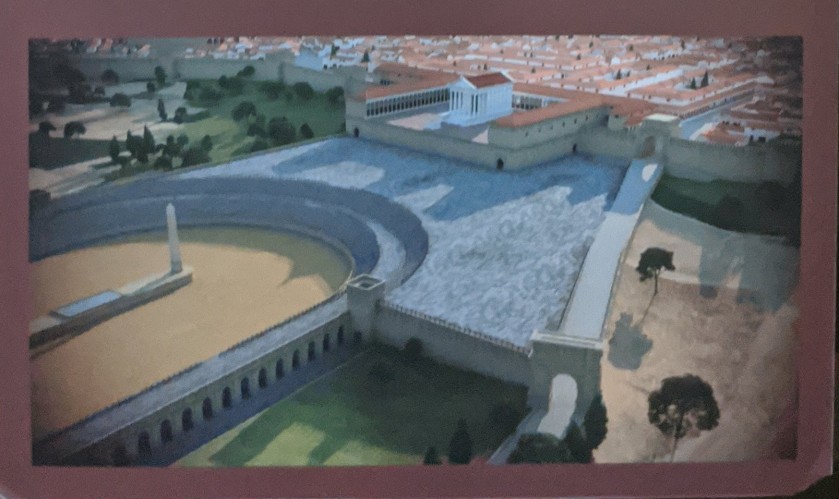 We had tickets for La Mezquita the next morning, so we headed back to the hotel after this quick visit to the temple. However, on the subject of Roman awesomeness in Cordoba, I wanted to also share a picture of a place we visited the next day as well. In addition to the temple and a few other bits and bobs, there is an incredible Roman bridge spanning the river.

This bridge is very close to La Mezquita, which deserves it’s own post. So tune in next Monday for info about the Jewish quarter and one of my favorite buildings on the planet.

Missed previous posts? No problem! Read the whole series from the beginning. Or head to the next post now.