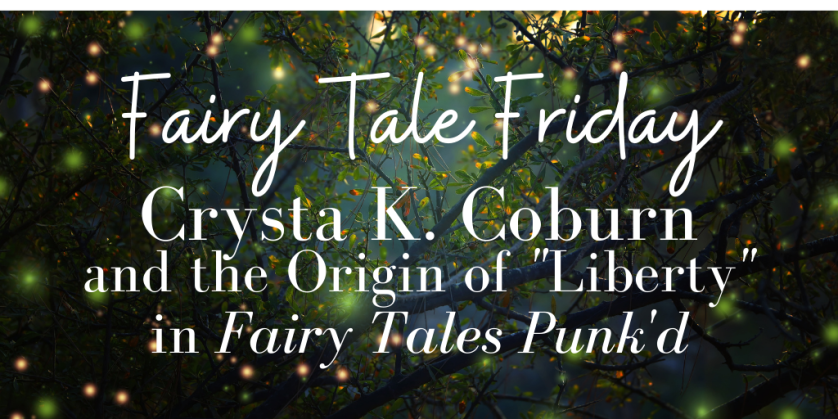 It’s been a while since I did a Fairy Tale Friday post. However, there will be many coming soon! Not just because I absolutely love fairy tales, but because my next short story anthology project is all about fairy tales and myth. I’ve invited my authors to stop by and talk a little about their contributions to the volume and their background in fairy tales and the punk sub-genres. So without further ado, let’s welcome Crysta K. Coburn to the series!

Hey Crysta! What is the title of your story in Fairy Tales Punk’d? Tell us a little about it.

My story is called “Liberty.” The titular character is on the run from her stepfather, who wishes to force her into marriage in order to maintain his ties to their motorcycle club’s previous dynasty.

Did you start with an existing story and punk it, or create something from scratch? Did you discover any cool resources along the way?

I did use an existing story – several, actually. I started with one of my favorite fairy tales, Cap-o’-Rushes, which is English in origin. While reading about it on Wikipedia, I discovered similar stories, and I eventually settled on the aptly titled “The King Who Wished to Marry His Daughter,” a Scottish tale. I took pieces from this and other similar stories as well as making things up. I chose to use a stepfather rather than a father for the same reason the Brothers Grimm changed mothers into stepmothers.

Have you always been interested in fairy tales, or was this your first time working in the mythpunk genre?

I have always loved fairy tales! I consider them a hobby, and I often read tales from cultures across the globe. I edited and contributed to “The Queen of Clocks and Other Steampunk Tales.” My story “Treasure” was based on an early version of “Snow White” much different from Disney’s. I also wrote a steampunk short story based on one of the Ancient Greek myths about Aphrodite called “Where the Light Enters” that was included in the anthology “Cogs, Crowns, and Carriages.” I have other mythpunk stories that are not yet published.

Have you dabbled in any of the punk sub-genres before?

I have several short stories punished in the steampunk genre, but this is my first foray into another ‘punk. I intended it to be dieselpunk, but being a romantic fairy tale, it isn’t what I normally associate with dieselpunk. Admittedly, dieselpunk is a pretty broad category just as steampunk is.

What is your absolute favorite genre to write and why?

I actually think of myself as a romantic author. When I was a teenager, I cowrote an epic fantasy novel (unpublished) that had a heavy romantic element. My first two published steampunk stories were adult romances. I am a child of Aphrodite. There is usually a romantic element to my stories. But I have also written a number of horror stories – what I call my monster stories. Those are fun, too.

Where can people find out more about you and your previous writings?

Thanks for stopping by, Crysta!

You can read all about Liberty and her quest for freedom in Fairy Tales Punk’d coming to Kickstarter Sept 17-Oct 19, and due for wide release in Dec 2020. Stay tuned for more interviews and news about the project.