Welcome to the blog tour for The Monster Huntress. I had the chance to interview the talented David Wiley about his new book. Without further ado, let’s hear from David.

Tell me a little about The Monster Huntress.

The world tells Ava she’s just a little girl who should know her place, but Ava wants a sword not a crown.
Ava and her father are following in her mother’s footsteps, hunting monsters in the 13 Kingdoms, seeking revenge for her mother’s untimely death. Little do they know that the monster responsible is building up a dangerous force. When The King requests the help of Ava’s father in exchange for her becoming a princess, Ava is not pleased. Can Ava escape her fate and the obnoxious prince of Harborg to live the life she’s always known, or will the dark plans of the monster catch her in his trap. 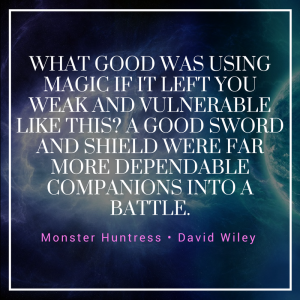 Where did you get your inspiration for this story?

It all started in 2012 when I wrote a four-part serialized short story called Ogre Hunt. That was the first appearance of Ava in fictional form, where she hunts down an ogre for a monetary reward. That spurred a sequel story, which was significantly longer, called Doppelganger Danger. That was when I truly fell in love with the character, and was also where Ava’s pal, Edgar, surfaced. When it came time to write a full book, I knew it had to star Ava. However, I decided that I should start by going back in time and explore her early years becoming the fearsome huntress rather than move forward in the current timeline.

Do you have a favorite setting in the book?

My favorite setting is probably the library in Hárborg castle. What can I say, I’m a sucker for large libraries filled with old tomes!

If you had to sum up the theme of The Monster Huntress in five words or less, what would you say?

How do you make time to write?

Intentionally. This is one of those things that, if I don’t make the time to do it, it will never happen. While I love writing, there are so many more pressing things I can spend my time on, not to mention things that involve socialization with friends and my wife. You’ll never have that “free time” you imagine will get spent on writing – it’ll get absorbed into the black hole of the internet. So it is rarely as often as I’d like, but enough that I can see progress over time.

What is your ideal setting for writing?

A cabin, in the woods, with no internet, where the days are long and sunny and the temps are always around 70. In reality, though, almost all of my writing is done at home, with a Spotify playlist going containing the Lord of the Rings Soundtrack, Final Fantasy Soundtracks, Brunuhville, Taylor Davis, and Lindsey Sterling.

What is your favorite genre to write?

Fantasy, because it is the genre I grew up with. From watching Willow a hundred times at my grandparent’s house as a young kid all the way until discovering the greats like Tolkien, I have always immersed myself in this genre. It frees the imagination to run wild, and has so many excellent authors producing more books than I could ever hope to read in my lifetime. So this is my way of helping to pass the torch, so to speak, and try to help inspire future generations of readers by writing in the genre that shaped me in so many ways.

Are there any genres you haven’t tried but would like to?

Someday I hope to write historical fiction, set in Europe during the period of the Dark Ages-Middle Ages. That is an area of history that has always drawn me in with King Arthur, knights, castles, and other staples of fantasy settings. Lately I’ve been drawn to a lot of historical information about that period, and enjoying some Bernard Cornwell novels, such as his Last Kingdom series. 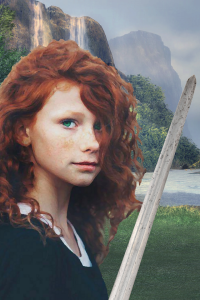 Who is your favorite character that you’ve ever created?

Ava, for sure. I fell in love with her character when I first penned her to life in Ogre Hunt. My heart and soul has poured into her story, and I hope to someday have my own little girl who can be inspired by the fiery young protagonist. She is not so much a reflection of who I am, but rather a picture of what I hope my daughters would be: bold, strong, persistent, motivated.

Are there any writers who inspire you?

J.R.R. Tolkien because he created more than a story; he brought an entire world to life that has captured the imagination of generations of readers, writers, and more. I hope to someday be able to worldbuild half as well as he did. Other inspirations include C.S. Lewis, Robert Jordan, and Brandon Sanderson.

Do you have any advice for aspiring writers?

Just write. Your first draft doesn’t have to be perfect. Stopping to clean up every detail in Chapter One until it is perfect will prevent you from ever reaching Chapter Two. Power through the story while it is fresh in your mind and the creativity is flowing. The rest can be added, subtracted, or fixed later. After it is finished.

Where can we find more of your writing?

I have it all detailed out on my website, http://authordavidwiley.com, but for those interested in exploring more than Monster Huntress, I would recommend A Merchant in Oria, a fantasy novella set in the same world as Monster Huntress. After that, my contribution to Tales from Our Write Side and to After Avalon anthologies both contain stories that I still enjoy revisiting.

Thanks David! And good luck with the rest of the tour!

You can find fun new posts about The Monster Huntress during the blog tour starting today and ending April 27.

Track down Monster Huntress today and get the special preorder price of $2.99, half off the release day price! Want to join the exciting tour and learn more about the author and this exciting series? Join us on Facebook and see each stop on the tour as it goes live. We’re doing an awesome giveaway that is part of the pinned post on the Facebook tour page. It may involve some awesome board games, like Lords of Waterdeep!