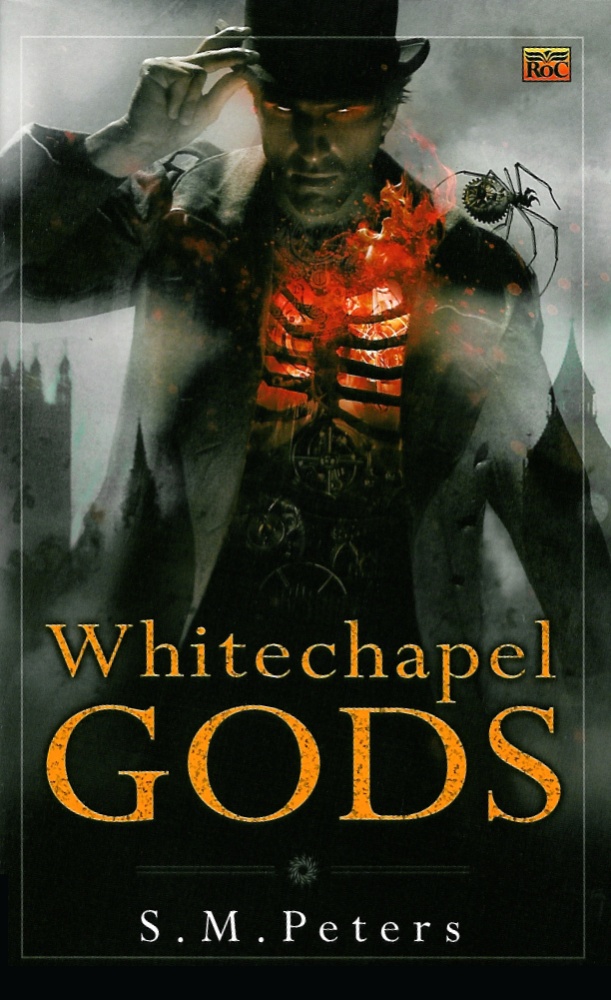 I ran across this one in a second-hand store months ago, but I hadn’t had the chance yet to read. Whitechapel Gods was always pulling at me from the bookshelf (I think it was those smoldering eyes on the cover), and I finally had time to oblige over the holidays. A six-hour round trip bus ride gave me plenty of time to consume and digest this very colorful creation by S. M. Peters.

But when I say “colorful” please do not picture a rainbow. This is a dark tale of humankind caught in the middle of a millennia-old struggle between beings of great power who use their influence to wage a battle of head versus heart, logic versus love. The world is a very different place, and people are turning into machines either by choice (the “crows”) or by infection by a baffling disease that changes your internal organs into gears and sprockets. The author paints a vivid and often disturbing picture what is going on behind the scenes of an alternative Whitechapel during Victoria’s reign. No seriously, if you have a developed imagination but not a strong stomach, I would think twice about reading it. I will just say that the word “pus” appears several times, and leave it at that.

Even though there is definitely Steampunk technology to offer, this book dwells strongly in the metaphysical. It is an intriguing mix of science fiction and philosophy, with many of the battles occurring in the realm of the imagination and not on the Whitechapel streets, though there is a fair amount of that going on as well. The protagonists were well-developed and multifaceted which led to some interesting twists in the plot. I felt the ending was a bit too tidy, though that may not be the best choice of word considering very few of the characters make it to the end, but it was satisfying.

I would definitely recommend this book to a mature reader, especially someone who is looking for something a little more toothsome than the whimsical tales often found in this genre.