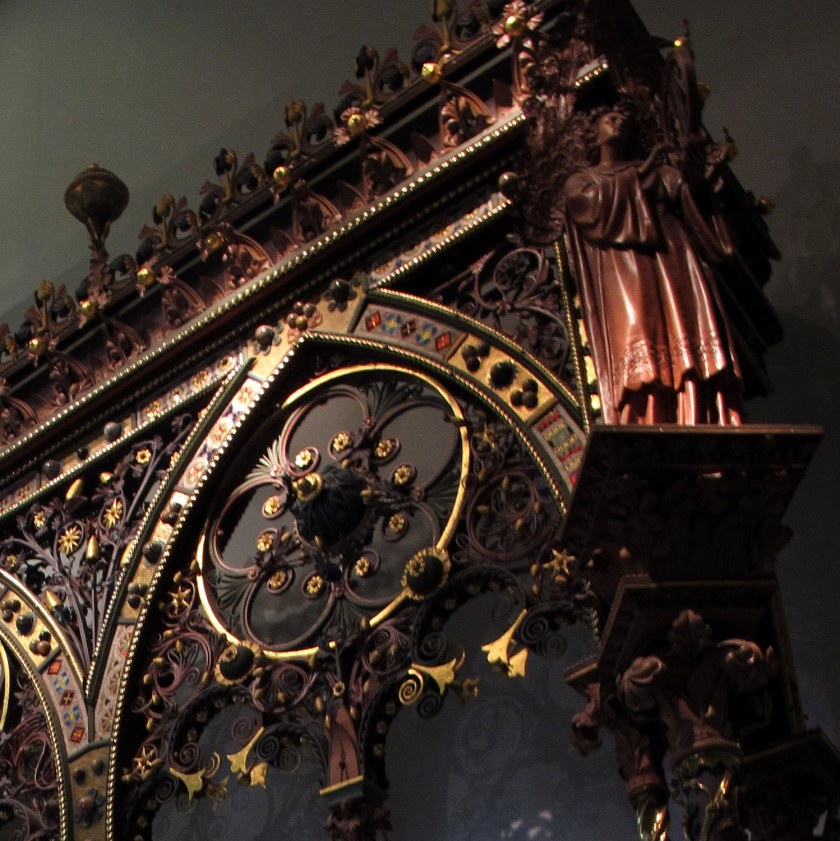 The site of the Victoria and Albert Museum was purchased largely through the proceeds from the Great Exhibition of 1851, which was the first international exhibition of its time, though not the last. Many of the wonderful items showcased at these types exhibitions that were held all over Europe during the 19th and 20th centuries eventually found a home at the museum and are still on display today. When walking through the exhibit halls I felt like I was on a scavenger hunt looking for these pieces of history which were seen by millions of people during the course of exhibition and are still breathtakingly beautiful to behold over 160 years later. One of the appeals for me about Steampunk and the era that gave rise to the aesthetic is the emphasis on craftsmanship, and there is no shortage of that at the V&A. Here are two pieces of the most impressive pieces that I encountered during my visit.

This “cathedral in wood” was a gift from the Austrian Emperor, Franz Ferdinand, to Queen Victoria. According to the museum label, it’s decoration reflected the debate about the unification of all German-speaking peoples under one rule. The bookcase had to be at least 20 feet tall, which means it just might hold the entire literary collection of one Steampunk fan 🙂 In the center there is a Belgian altarpiece on display that looked like it had been carved out of the most delicious dark chocolate, but it was also made of wood. These two pieces were not originally shown together, but they both made cameos at the Great Exhibition. The altarpiece reflects the revival of the Gothic style that is often seen in Steampunk works, and makes it a lovely addition to the imposing bookcase.

This symphony in metal is called the Hereford screen, and was on display at the International Exhibition of 1862. Like the altarpiece above, this was a way of harkening back to the Gothic era when churches employed magnificent screens like this one. The choir would stand behind large and ornately carved wooden screens, but this one was intended to showcase new advances in metal-working techniques as much as celebrate the Gothic style. There are several figures on the screen, which is over 10 meters high. The figures could very well have been cast in bronze, but instead were created by using newly-discovered electroplating technology that employed plaster molds and electricity to bend copper to the artist’s will. This is truly an example of old-meets-new in the Victorian era, so it definitely piqued my Steampunk interest.

Have you spotted any pieces of the Great Exhibition or the International Exhibition in London? Please share!