So here we are again, back for Part 2 and more story synopses (If you missed Part 1 click here). My challenge was to summarize all 56 stories with a single sentence, so here are the three remaining volumes. (Please note that these stories have been compiled many times by different editors, and the exact order or collection may differ by edition.) 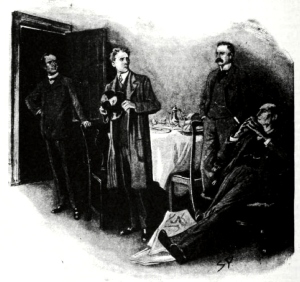 2. “The Adventure of the Norwood Builder” (set in 1894)
۞ When a man thinks he has been framed for murder, he needs Sherlock to exonerate him in the face of a mountain of incriminating evidence, including a bloody fingerprint belonging to the accused that mysteriously appears after the crime scene has already been investigated by both Holmes and Lestrade.

3. “The Adventure of the Dancing Men” (set in 1898)
۞ A man makes a promise to his new wife to never look into her checkered past, but he can’t ignore the strange drawings of dancing men that appear around their property and seem to be driving her mad with anxiety.

4. “The Adventure of the Solitary Cyclist” (set in 1895)
۞ A music teacher hired under strange circumstances is followed almost daily by a stranger on a bicycle, so she enlists Holmes to get to the bottom of it.

5. “The Adventure of the Priory School” (1901)
۞ A boy from a rich family goes missing from his school, but it is unclear if it is a kidnapping or if something else is afoot.

6. “The Adventure of Black Peter” (set in 1895)
۞ A family seeks Holmes aid to find the truth when a man is murdered in his “cabin” in the yard.

8. “The Adventure of the Six Napoleans” (set in 1900)
۞ Lestrade brings Holmes onto a seemingly innocuous case where several statues of Napolean I are being smashed in different part of the city, but it turns out to be a very interesting problem.

9. “The Adventure of the Three Students” (set in 1895)
۞ A prof’s proofs are found out of place in his office, and the cheater must be found before the exam.

10. “The Adventure of the Golden Pince-Nez” (set in 1894)
۞ Holmes solves the murder of an old man without an enemies and only has one real clue to go on; the pair of pince-nez left behind at the scene.

11. “The Adventure of the Missing Three-Quarter” (set in 1896)
۞ The key player on the Cambridge rugby team goes missing a few days before the big game against Oxford.

12. “The Adventure of the Abbey Grange” (set in 1897)
۞ Holmes is annoyed when he is called in to a case that appears to be a burglary gone bad, but upon further examination the case is far more interesting.

13. “The Adventure of the Second Stain” (set in 1888)
۞ The Prime Minister comes to Sherlock to find a document that could mean war for Britain if it is not recovered.

Volume: His Last Bow (also known as The Reminiscences of Sherlock Holmes)
Dates: The stories were published between 1908-1917 and set between 1890-1914.

1. “The Adventure of Wisteria Lodge” (set in 1892)
۞ Part 1, “The Singular Experience of Mr. John Eccles”: A new client is in the middle of telling his story when the police burst in and arrest him as their prime suspect after his distracted host at the Wisteria Lodge is found beaten to death.
۞ Part 2, “The Tiger of San Pedro”: The murdered man had received a note shortly before his death but before Holmes can speak to the writer the murderer tries to abduct her.

(2. “The Adventure of the Cardboard Box” (see Memoirs of Sherlock Holmes above) appears as the second story in some compilations. see Part 1)

2. “The Adventure of the Red Circle” (set in 1902)
۞ A landlady approaches Holmes to figure out the story behind her mysterious lodger who receives strange signals in the night and she suspects only narrowly escaped an attempted kidnapping.

3. “The Adventure of the Bruce-Parlington Plans” (set in 1895)
۞ A government official is found on the train tracks, but Mycroft brings in Holmes to investigate what appears to be a case with an obvious cause of death because of the nature of the dead man’s work.

5. “The Disappearance of Lady Frances Carfax” (set in 1901)
۞ In this globetrotting adventure, Watson does most of the investigating when a lady goes missing after her religious beliefs are used to manipulate her.

6. “The Adventure of the Devil’s Foot” (set in 1897)
۞ Holmes’ health is declining, and when he goes to the country to convalesce he becomes embroiled in a mystery where a game of whist goes very, very wrong.

7. “His Last Bow” (set in 1914)
۞ Holmes comes out of a retirement full of bee-keeping for a case involving international intrigue between Britain and Germany.

Volume: The Casebook of Sherlock Holmes
Dates: This book was compiled of short stories published between 1921-1927.

1. “The Adventure of the Mazarin Stone” (set in 1903)
۞ Holmes employs a wax dummy to act as a decoy to protect him from assassination attempts while investigating a stolen Crown Jewel.

2. “The Problem of Thor Bridge” (set in 1900)
۞ Even in the face of damning evidence, Holmes is engaged to exonerate a governess when her employer is found dead from a gunshot with the “smoking gun” in the governess’ room.

3. “The Adventure of the Creeping Man” (set in 1903)
۞ After a man starts to act strangely, his own dog attacks him and his daughter and son-in-law-to-be ask Holmes to solve the mystery of his weird behavior.

4. “The Adventure of the Sussex Vampire” (set in 1896)
۞ An infant is found with a wound on his neck, and witnesses say they’ve seen his mother sucking his blood in the night.

5. “The Adventure of the Three Garridebs” (set in 1902)
۞ Holmes is hired to locate men with the last name “Garrideb” in order for them to split a large inheritance, but something that seems straightforward is in truth one of the most interesting cases of Holmes’ career.

6. “The Adventure of the Illustrious Client” (set in 1902)
۞ An unidentified, but more than likely royal, client needs Holmes to reveal the truth behind a rascal who “ruins” women and is interested is wooing the client’s daughter.

7. “The Adventure of the Three Gables” (set in 1903)
۞ An lady is approached by someone who wants to buy her house and everything in it, and a gang of thugs is hired to ensure her cooperation.

8. “The Adventure of the Blanched Soldier” (set in 1903)
۞ A former soldier is on the hunt for his army buddy, especially after visiting his friend’s family estate and supposedly a pale face peering through his window while on the property.

9. “The Adventure of the Lion’s Mane” (set in 1907)
۞ While Holmes is visiting a friend who is headmaster at a prep school one of the teachers staggers into their midst and dies on the spot after mumbling something about a lion’s mane.

10. “The Adventure of the Retired Colourman” (set in 1898)
۞ When a man’s wife and his savings mysteriously disappear (along with his neighbor), a retired art supply dealer enlists Holmes’ aid.

11. “The Adventure of the Veiled Lodger” (set in 1896)
۞ A female lodger is hiding more than just her face in this tragic tale involving a circus gone awry decades earlier.

12. “The Adventure of Shoscombe Old Place” (set in 1902)
۞ Holmes uses the behavior of animals to aid his deductive process surrounding the mysterious events at the stables of Shoscombe.