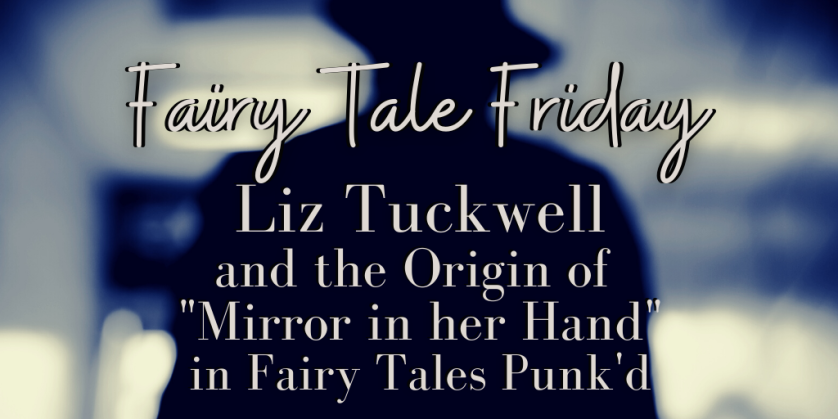 Liz Tuckwell and I were both in Harvey Duckman Presents Vol. 3, and in Fairy Tales Punk’d. We both also happened to choose a noir approach to our fairy tales.

What is the title of your story in Fairy Tales Punk’d? Tell us a little about it!

The title of my story is “Mirror in Her Hand”. It’s set in 1930’s Los Angeles and features a P.I. with a difference. I don’t want to say too much and give away any spoilers.

Did you start with an existing story and punk it, or create something from scratch? Did you discover any cool resources along the way?

I started with the fairy tale, “Snow White”, updated it and added a dieselpunk twist. Dieselpunk is one of my favourite punk sub-genres along with steampunk. I like the aesthetics and the retro-futuristic technology. I also love all the classic noir films such as “The Maltese Falcon”.

Have you always been interested in fairy tales, or was this your first time working in the mythpunk genre?

I’ve always been interested in fairy tales and have written another “Snow White” story and a “Red Riding Hood” story with a SF twist but it was my first time. “Snow White” is one of my favourite fairy tales because it has some great characters and settings – the evil stepmothers, the huntsman, the dwarves and the contrast between the castle and the small cottage. I’ve always found the traditional ending with the prince rather creepy but it’s not the only fairy tale – Sleeping Beauty, I’m looking at you.

Have you dabbled in any of the punk sub-genres before?

Not really, although I have read a fair few such as “Empire State,” and I love the Gail Carriger Parasol Protectorate series. Having done this one, I’d like to do more.

What is your absolute favorite genre to write and why?

I like to write alternate historical fantasy because I like imagining history where events have happened differently and magic and/or fantastic creatures and gods are present in the world.

Where can people find out more about you and your previous writings?

I’ve had a couple of alternate historical fantasy stories published in the Harvey Duckman Presents series. They’re set in an alternate timeline where Remus killed Romulus and the Reemish Empire rules. I’ve had a horror story published in the Short! Sharp! Shocks! series. I’ve also published a collection of fantasy and horror short stories themed around Christmas, Quirky Christmas Stories, with my friend Rose Bishop, and Fantastic Flash Fiction, a collection of fantasy, science fiction and horror stories. I’ve also published a dystopian science fiction short story, “The Boom Show”. You can watch a video on my reading aloud that story on You Tube for the Stop Hate UK Festival to celebrate the anti-hate crime’s charity’s 25th anniversary.

Woke up to Something Cool on my Coverfly Dashboard…

I’m a Quarterfinalist for the 2021 ScreenCraft Screenwriting Fellowship

LitCon 2021 – Adapting Your Novel for TV and Film Panel Discussion