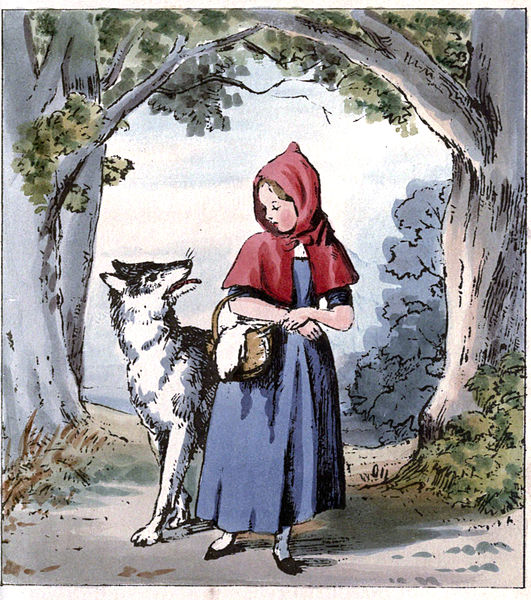 One of my favorite classes in college was a course I took freshman year called “Twice Told Tales.” We looked at original works and ones that were their direct descendants. We spent the first three weeks on just one story: Little Red Riding Hood.

I got to use an amazing reference book that had the first written versions, as well as chronicling the evolution of the little girl with the red cloak in other media, such as advertising. Unfortunately, the book is in a box back in the States with 90% of my possessions. So, I can’t give you the title, but the gist of the contents was that over time, things got really sexual. As “wolf” became synonymous with “man who preys on and seduces young women” rather than an actual predator, more adaptations involved a sexual relationship between the two. This meant that Red often became older and her skirt shorter, and she’d flirt with the wolf to entice him.

Charles Perrault is often credited with being the original writer, and you can read his version here. However, the text book had an even older version collected sometime before Perrault recorded his from oral tradition. The original story is very short, and I basically memorized it at the time because I loved pulling it out as a fun fact-a-palooza at parties. I’ll admit, I like throwing in vernacular and little color commentary as I go for my own amusement, but the facts are all there.

The Original “Little Red Riding Hood” Story (or at Least, a Reasonable Facsimile…)

Little Red was a good girl, and most importantly, super pretty. Her mom and grandmother doted on her and made her a special red cape that suited her so well, she didn’t get to have a real name anymore. Everyone just called her Red Riding Hood. When her grandma got sick and her mom sent RR Hizzle to take over a cake and some butter, Mom warned her not to stray from the path. Red was all “No problem, Mom,” and set off. Even though there were pretty flowers around, she was careful to stay on the path as instructed. (See, I told you she was a good girl.)

But then, she came to a fork and had to choose. Would she take the path of pins or the path of needles? While she was deciding, a wolf came out of the underbrush and was like, “Yo, how you doing?” He wanted to eat her, but the woods were pretty public. Red told him about her errand and her dilemma with the two paths. Mr. Wolf said the path of needles would get her there faster and give her time to look at the flowers on the way home. She said thanks and skipped off down the path of needles.

The wolf rubbed his paws together maniacally and took the path of pins, which was actually the better path. He beat Red to G-ma’s pad and had himself an appetizer in the form of little old lady tartare. He didn’t eat her all up though, he sliced up some of her meat and put it on a tray and drained some blood into an old wine bottle. He left them on the table and got into the bed.

With an oblivious happy tune on her lips, in walks Red. She greets the lump in the bed, thinking it’s her granny, and warms her hands at the fire. A scratchy voice tells her to help herself to some of the meat and wine left out for her. Red happily complies. A little cat walks by and says, “Slut! To eat the flesh and drink the blood of your grandmother.”

Red must be pretty dumb, because neither the fact the cat is talk or its words give her a moment’s pause. “Granny” tells her to come and get in the bed with “her”, so R-dawg asks where she should put her shoes. Wolf-ma tells her to throw them in the fire because she won’t need it any more. Red shrugs and does it. (Seriously, she is that dumb. Just watch.) Then, she asks where to put her socks and gets the same answer, so into the fire with her socks. (Yep, she did it again.) Last, she asks where she should put her dress and Wolf-ma says throw it in the fire. (Uh-huh.)

So then, Red goes over to the bed. She climbs up and finally starts to get suspicious. (Too little, too late though.) Red cries, “Grandma! What big ears you have.”

“The better to hear you with, my dear.”

“Grandma!” What big eyes you have!”

“The better to see you with, my dear.”

“Grandma, what big teeth you have!”

“The better to eat you with,” the wolf replies. Then he eats her.

Yep. Seriously. In the original, there is no heroic woodcutter. There is no saving Little Red and G-ma. Why? Because it’s morality tale, not a happily ever after.

So…the moral was not to listen to your Grandmother because she just want to eat you?

I can see where you might get that impression, but that’s because you aren’t a 11th century French peasant. (And really, who is these days, am I right?) So, here’s the deets you might have missed.

The Paths of Pins and Needles

Back in the day, a lot of “women’s work” consisted of making and repairing clothes. It took a while to get really good at stitching, but pinning things in place was a lot easier. That meant that little girls often did the pinning, while women (of an implied reproductive and so sexual age) used needles. By choosing “the path of needles”, my professor said she was choosing maturity and sexuality while leaving her innocence behind.

Also, both paths would have led her to her destination, but she chose what she believed was the faster way so she could dawdle on the way home. So the story is also a warning against sloth.

What can I say? No one likes a cannibal. I guess this bit about eating granny was a warning against those dark thoughts you might get in the dead of winter and all the grain has run out…

My prof couldn’t give a satisfactory answer about the talking cat and how Red took it in stride, except to say that the kitty’s words were meant for the people listening to the story. We were apparently to assume that she couldn’t understand the cat, it was just giving commentary for those having the story told to them. (In case they got any cannibalistic ideas, I suppose).

On the Flip-Side, Getting in Bed with Family WASN’T a Big Deal

Weirdly, stripping down to her skivvies and getting into bed with someone else would have been totally normal and innocuous behavior to the target audience. Keep in mind, for a long time a “bed” just meant a pile of straw or other relatively soft thing you lay on. If someone was lucky (and rich) enough to have a proper bed, they likely shared it with others. So, even if that detail may have seemed like the sexual part of the story, the original listeners wouldn’t have batted an eye.

Plus, they didn’t have any sort of idea of disease transference, so getting in bed with a sick loved one to help warm them would have been just the sort of job for a visiting granddaughter.

What about the Woodcutter?

I’m glad you asked. That was my first reaction, too. Perrault’s version does mention that there were woodsmen around, which is why the wolf didn’t just eat Red up on the spot. However, it wasn’t until later there was any rescuing to be had. The Grimm version does involve a huntsman coming to the aid of Red and Granny, and he’s sometimes a woodcutter in other versions. Occasionally, the wolf sleeps through the whole ordeal of being emptied out, and then is filled up with stones. He wakes up thirsty and when he goes to the river, he drowns.

In every case, things are pretty bloody in this tale. I can see why Disney never tried to get a Blockbuster out of this one!

That wraps up today’s Fairy Tale Friday post, but you can come back next week for a review of one of the many Red Riding Hood adaptations out there.