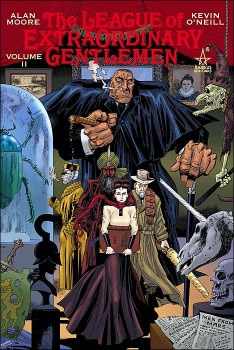 Your favorite cohort of Steampunk heroes is back in another installment of The League of Extraordinary Gentlemen!

Our story starts on the surface of Mars where literary heroes Gulliver Jones (Lieut. Gulliver Jones: His Vacation, 1905) and John Carter (Princess of Mars, 1917) are organizing a resistance against an alien race of foreign origin that is trying to invade. All too quickly their struggle ends with the aliens on their way to the homeland of those who oppose them: Earth.

We meet up with Ms. Murray, Allan Quartermain, Captain Nemo, The Invisible Man and the ever so dubious Dr. Jekyll/Mr. Hyde when they are called in to investigate an impact crater in the countryside. Tentacled aliens make short work of the white flag waving humans who try to make contact, and the league retreats for the evening. The Invisible Man slips unseen through the darkness (like a dark unseeable slippy thing) to meet with the aliens in secret, and through the ingenious use of scribbling pictures in the dirt he becomes their ally. After getting his intell, the aliens mount an attack from craters all over England using the giant walking tripods they built to protect their soft, molluscky bodies.

While Nemo and Hyde keep London safe from the attacking hordes, Mina and Allan are sent on a mission to retrieve a special weapon from the infamous Dr. Moreau (The Island of Dr. Moreau, 1896). Relationships are reshaped and bodies broken in the pages leading up to the exciting conclusion of this installment of Alan Moore‘s The League of Extraordinary Gentlemen.

I liked this book, but I preferred the first “LXG”. There were some very interesting moments between Hyde and Mina, and between Mina and Allan, but I wanted an enemy that was less unambiguously evil than killer aliens that just wanted to blow stuff up. The double crossing and false identities in the first one made for an interesting and complex story, which was really what I was looking for in my sequel rather than a romantic entanglement between the doddering Quartermain and Mina. (Yep, there is totally grandpa sex in this book) I usually really like to see my characters grow and change, but it is tricky with this concept of bringing all of these fully-formed characters together because too much deviation by Moore could feel like a betrayal to the original.

In addition to the main story, there is an additional material like the New Traveller’s Almanac that informs the reader all about the world of LXG and more literary reference fun.

If you haven’t read it, check out my reviews of The League of Extraordinary Gentlemen Volume 1.