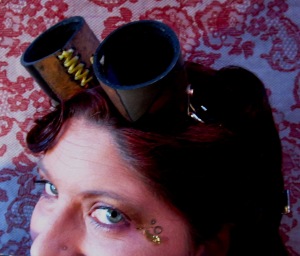 For the past 5+ years, my husband, tiny dog and I have been living the lives of vagabonds and bouncing between places as far off as Bulgaria and as familiar as my childhood state of Minnesota. I’m currently living in the Black Forest of Germany, which has really been getting me interested in fairy tales lately. After that? We’ll see which way the wind is blowing.

What do I Write?

I became interested in Steampunk starting in 2009, which rekindled a long-dormant love of writing fiction. I started my first blog on Steampunk in 2012, but in 2017, I left it to become the second editor for SteampunkJournal.org, the world’s most popular Steampunk news site. During 2017, I coordinated and contributed to the Collaborative Writing Challenge’s 7th project with a Steampunk theme called Army of Brass. In 2018, my horror re-telling of Pinocchio entitled “The Marionette” was featured in in The Queen of Clocks and Other Steampunk Tales anthology. I’ve started working on the second book in a Gaslamp fantasy series about a con woman forced out of retirement when her past comes back to haunt her…literally. Until it’s published, you can read excerpts from the first book, No Rest for the Wicked.

My geek girl tendencies don’t stop there. I’ve been known to dabble in a variety of fantasy off-shoots, including contributing “The Vigil” to the Chasing Magic anthology and lending my pen to the collaborative fantasy novel, Esyld’s Awakening. I’m currently working on a standalone contemporary fantasy novel that pits a movie crew against the fairy tale creatures they awaken while shooting on location in the Black Forest (Working title: Grimmer).

I also occasionally lend my pen to contemporary romance under the pen name M.E. Anders. You can read a short story called “Next Time” as a companion to the Collaborative Writing Challenge’s novel, The Map.

Find Me Around the Web

This is an interview I did in March 2017 with Radio RetroFuture.

My most recent interview just went live on HorrorTree.com, but you can also read a Steampunk Cavaliers interview about my first experience with Steampunk, an interview by Steampunk/Ancient Roman author Daniel Ottalini, and check out my interview and articles at Steampunk Journal.

Find awesome writing tips in my monthly posts for Our Write Side.