We left the Alhambra in the afternoon and had a little nibble and, of course, sangria. We had planned to buy souvenirs at the shop there, but unfortunately it was closed because of Covid. So we headed out of the grounds (this time going downhill, a major improvement!) and happened upon a very nice shop. We hadn’t done all that much shopping so far on the trip, so we might have gone a little…overboard. But it wasn’t anything we couldn’t fit in our suitcases.

Over the cash register, a television was showing flamenco. As we learned from the helpful cashier, it was advertising for a particular show in town called La Alborea. It was one of the only shows running during Covid-times, and also touted as among the best. We didn’t have any particular plans for that evening and had so much fun at our first flamenco show, how could we resist? We had the choice of show only or getting tapas and wine, or a different full dinner. We were on the fence, but the cashier assured us the balcony seats that came with the tapas was the best view in the house, and she wasn’t kidding! 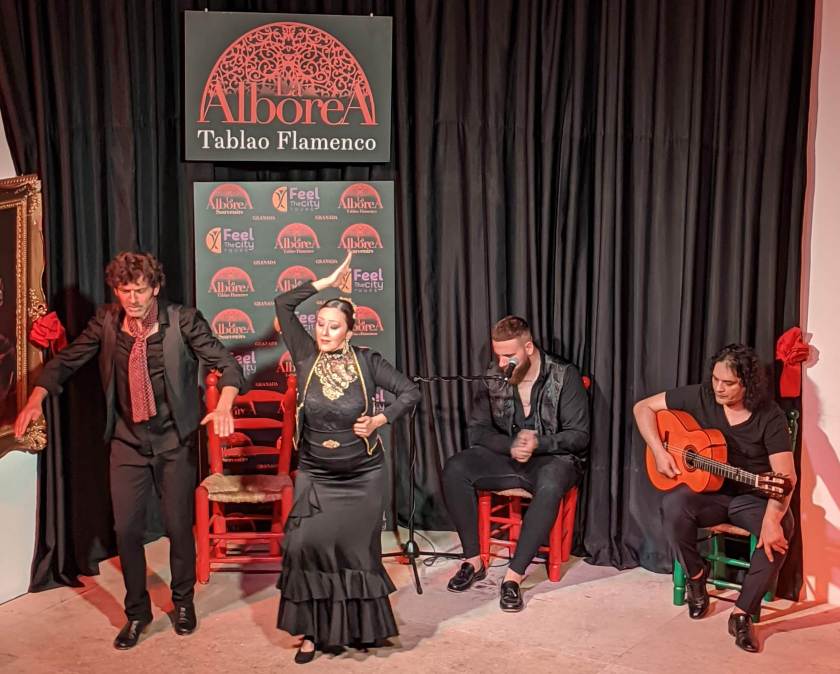 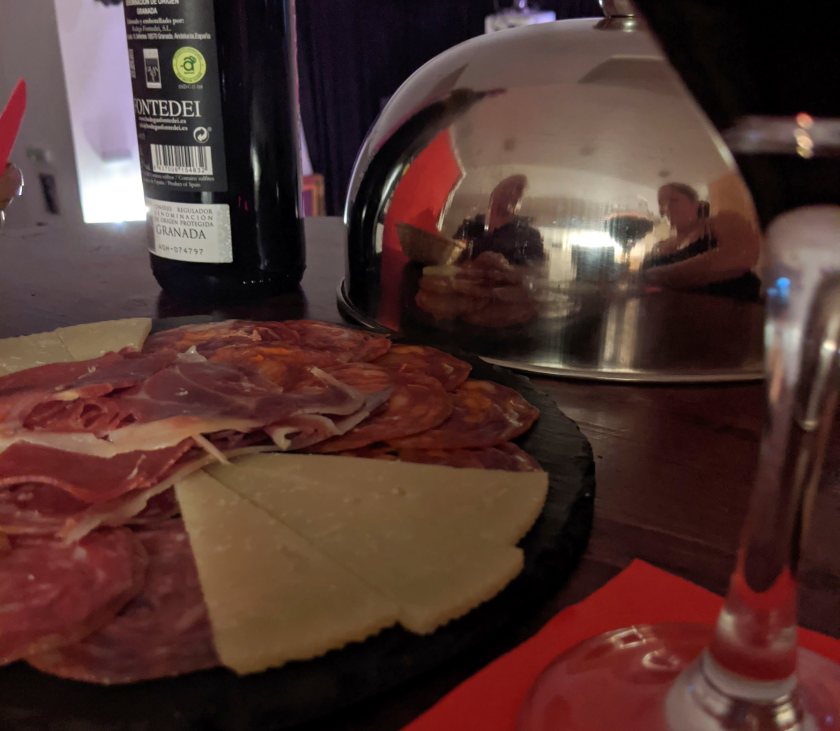 The show was fantastic. Where the first one was raw and playful, this show was polished, precise. I took videos of the numbers, each one lasting something like 15-20 minutes, but out of respect for the artists, I am only going to share one minute to give you a taste of what we saw.

The night was still fairly young when we got out of the show, so we headed over to the nearby Caldereria Nueva, which is lined with Arab teahouses. In the past few decades, these establishments have been on the rise as Muslims are reclaiming their heritage in the area. After all, this part of Spain was under Islamic rule for over 700 years. We had hoped to get a chance to smoke some hookah, a favorite pastime of ours, but because of health concerns, we had to settle for just tea. We had almost the entire tea house all to ourselves, and it was a lovely way to refresh after the show. 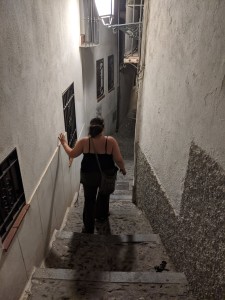 When I read up on visiting The Alhambra, one recommendation was to also visit the adjacent hill and the Mirador Nicholas where you can see an amazing view of the complex as a whole. In the “cool” 90 degrees of the evening, we set out along winding “streets” like this one.

I was already pretty beat from our day trekking around the palaces, but the promise of sangria once we reached the top kept me going. And the view, of course. It was not to be missed. We found a cafe that was literally clinging to the edge of the overlook and snagged a seat on the open side.

Down in the valley, the faint sounds of more flamenco drifted up to us, coupled with laughter and friendly chatting. We were served the classic Spanish olives we’d come to expect and the sangria and brandy were fantastic. All in all, we joked that it was exactly what we would design if we were asked to created an immersive museum display of Granada.

The perfect end to a perfect day.

…which was followed by one of the worst 24 hours of the trip! I’m not going to devote a whole post to it because, why dwell? But the short version of events was we went up into the Sierra Nevada mountains. The town we stayed in wasn’t even a town, it was more like an extension of the ski resorts. I chose the location because they advertised a game room. We used to play pool and darts on a regular basis, so I thought it would be fun to spend an evening chilling out and playing games. We got there and there was no game room. On top of that, when though Google said all of the restaurants and bars were open, we struggled to find even ONE where we could eat. We also tried to find a way to watch a soccer match and were thwarted at every turns. So, we caught up on our journaling, watched a movie that night, and left right after breakfast the next day to our next stop, Nerja.

Tune in next week for some mind-boggling photos of our visit to the Nerja Caves.