For this week’s Fairy Tale Friday, I’ve got a special guest! Stacy Overby is crazy about fairy tale creatures, and is here to talk to us about “Cait Sith” as part of her blog tour for her new release. Take it away Stacy!

Have you ever wondered where fairy tale creatures came from? I have. In fact, this is some of what I explore in my new poetry collection, Scath Oran. Many of the creatures mentioned in that collection stem from Celtic mythology. Video games made one such creature famous. Any guesses what that creature is? No?

He goes by many names, but this has a primarily Scottish lineage and has been found as far back as 598 A.D. in the lore, though not by the name Cait Sith at that point. He was known as Irusan, King of the Cats in the legend of Senchan Torpeist, an Irish poet. Keep in mind, Cait Sith often isn’t just one being, but a group of cat-like creatures akin to the way we think of selkies or mermaids.

Legends about Cait Sith, pronounced ‘caught shee’, are abundant in Scotland. Some of them describe Cait Sith as a black cat with a white spot on his chest. He is as big as a dog and can be dangerous. Others talk about Cait Sith not being a true cat, but a witch who could transform into a cat eight times. If they did it the ninth time, the witch would stay a cat forever. Other myths do not place limits on how many times a witch could transform into a cat.

One concern the ancient Celts had with Cait Sith is that he would come and steal the soul of a deceased person before their burial. So, the ancient Celts played games to distract him from the deceased person. Riddles asked but not answered, wrestling and jumping, catnip spread around, fires, and music were all believed to distract the cat. After all, these tricks seem to work on many modern cats.

Celts thought once they buried the body, then the soul was safe from Cait Sith. Interestingly, legends are not clear on what happened if Cait Sith managed to steal the soul of a deceased person.

The Origins of Cait Sith

But where did this notion of the Cait Sith come from? Scholars think these stories resulted from a breed of cat in Scotland called the Kellas Cat. They are thought to be a crossbreed between a breed of Scottish wild cat and a domesticated cat. Some DNA testing shows to be true, at least for the few specimens tested so far. One variant of the Kellas Cat has been confirmed to exist, one that has pure black fur. The Kellas Cat can grow up to 3 feet long, with a tail that can be as much as another foot long and weigh up to fifteen pounds. In 2012, a population of Kellas Cats was found in Cairngorms National Park.

Unfortunately, legends of the Cait Sith also gave rise to less savory activities. Perhaps the worst of which is Taghairm. This ritual involved burning cats alive for four days and nights to summon a Cait Sith named Big Ears, who would grant wishes. Thankfully, the last known engagement of this ceremony was back in 1824.

What About Fairy Dogs?

Cait Sith is not the only fairy animal in Celtic mythology either. He is accompanied by Cu Sith, a fairy dog the size of a young bull. Most legends say Cu Sith is green in most legends, but occasionally is said to be white. Most interesting, his tail is described as coiled or plaited. According to Scottish versions of the mythology, Cu Sith roamed the Highlands. Much of Celtic mythology agreed in that Cu Sith was a harbinger of death. Most of the time he would hunt silently, but sometimes he barked three bays. These bays were said to be so terrifying that if people did not reach safety by the third bay, they would be overcome by fear so extreme they would die. 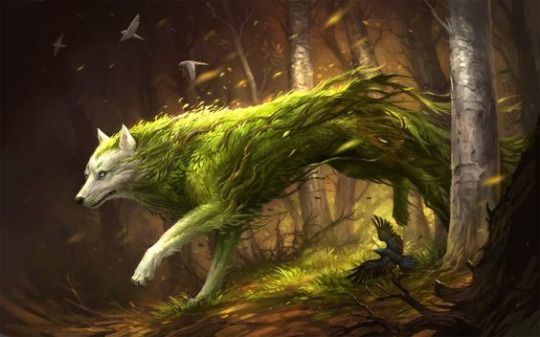 Perhaps the Gwyllgi was a close relative of the Cu Sith. This fairy dog was all black and roamed country roads at night. This  is probably where it got its nickname, “dog of darkness.” Given the chance, it scared the life out of anyone who ran across it. Some legends even liken this dog to demons and hellhounds. No wonder they were seen as a bad omen.

The pooka were another fairy animal to roam Celtic legends with Cait Sith. At least, they were animals most of the time. In general, the pooka took the form of horses and goats. They were rather vicious creatures who loved to play pranks, though they were not truly evil. The pooka sometimes took the form of other animals, and even human. As the Celtic world grew more agrarian, farmers would leave “the pooka’s share” in the fields. This would appease this unpredictable creature and ensure good harvests in the future. An interesting side note on the pooka—their name is quite like Puck from A Midsummer Night’s Dream. Perhaps Shakespeare did a bit of borrowing?

A more disgusting fairy creature to join the Cait Sith in the fairy animal realm is the alp-luachra. This evil creature, sometimes known as a joint-eater, creeps up on someone who falls asleep by the side of a stream. Then, it crawls down the person’s throat to snack on what that person last ate. The only way to get rid of it is to eat salted meat. Why? Legend says this makes the creature thirsty, which forces it to crawl out to get a drink.

So, there you have it—several of the fairy animals from the realms of Celtic mythology. Cait Sith and the Gwyllgi make appearances in Scath Oran: Poetry from the Otherworld along with other types of fairy beings and creatures from other mythologies. Some of these truly make me wonder what the seed of truth is behind these legends.

Follow along with all of the fairy tale fun on Stacy’s blog tour, now through Oct. 4.